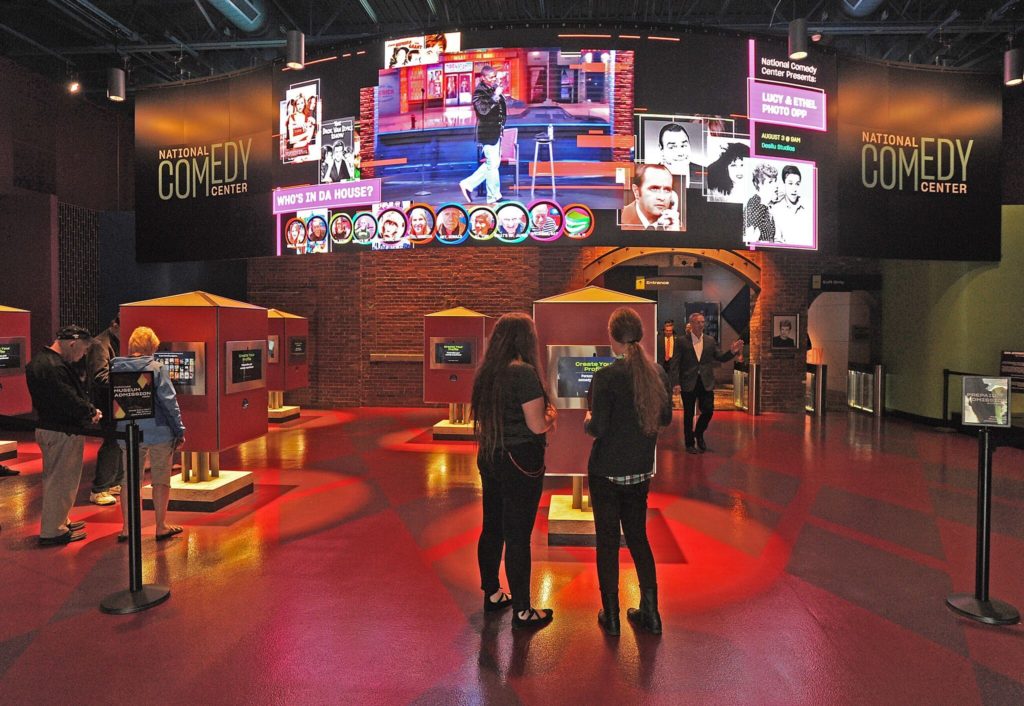 Pictured above, the lobby of the new National Comedy Center in Jamestown, N.Y. The center is expected to draw year-round visitors to Chautauqua County.

MAYVILLE, N.Y.: — According to a recent survey of lodging occupancy conducted by Smith Travel Research (STR), Chautauqua County has experienced strong growth in the past year. Overall lodging occupancy for the 10 brand name hotels surveyed by STR is up 14.7 percent for 2018 as of the end of August. Associated revenues are also up 14.1 percent, at $21.6 million.

Hotel occupancy was the strongest during July (76 percent) and August (73 percent), though the average for the year is just over 60 percent. July and August 2018 are up 4.5 to 5 percent over the same months in 2017. Summer months consistently represent the strongest revenue period, however, significantly increased occupancy percentages in non-summer months point to a growth in “shoulder season” visitation.  Lodging occupancy in March, April, May, and early June were much higher than usual in 2018.

“We are hoping that this trend will continue into September and October,” said Andrew Nixon, Executive Director of the Chautauqua County Visitors Bureau. “New developments in Chautauqua County should also help improve pre- and post-summer visitation.”

Some of these new developments include the recent openings of the National Comedy Center and Chautauqua Harbor Hotel; the imminent opening of the DoubleTree by Hilton hotel in Jamestown; and the proposed future development of other hotels, including those on the Lake Erie waterfront in Dunkirk.

The National Comedy Center in Jamestown provides the region with a major, new, and multi-season attraction that will draw individual vacationers, travelers, and group tours via motor coach. The center also received travel media publicity over the past few months, which will help build destination awareness about Chautauqua County among potential visitors.

The Chautauqua Harbor Hotel on Chautauqua Lake brings 135 upscale hotel rooms to the area. Similar Hart Hotel properties developed over the past few years in the seasonal vacation areas of Watkins Glen and Clayton, N.Y. have produced noticeable increases in lodging revenues. It is anticipated that this hotel in Celoron will help expand the county’s tourism industry significantly by attracting lakeside vacationers, wedding and celebration groups, and corporate and conference guests.

“These survey results provide great news for Chautauqua County as our hotel occupancy is up, our tourism is up, and we have more needed hotel rooms to better accommodate our visitors,” said Chautauqua County Executive George Borrello. “Our county’s economic development strategy is on track and the growth of tourism in our county will have an even greater impact.”

“It is very encouraging to see that tourism is alive and well in Chautauqua County, as evidenced by these latest lodging occupancy numbers,” said Mark Geise, Deputy County Executive for Economic Development and CEO of the County of Chautauqua Industrial Development Agency. “Without question, we need to continue to foster and support projects that boost our tourism economy.”

The CCIDA is an economic development organization authorized and empowered by the State of New York to make Chautauqua County a better place to work, live, and visit. We facilitate development by attracting new businesses, while promoting the retention and expansion of existing businesses. Assistance in the forms of incentives – tax abatements, low interest loans, and bond financing – enhances the opportunities for job creation and retention by our businesses. Business … END_OF_DOCUMENT_TOKEN_TO_BE_REPLACED